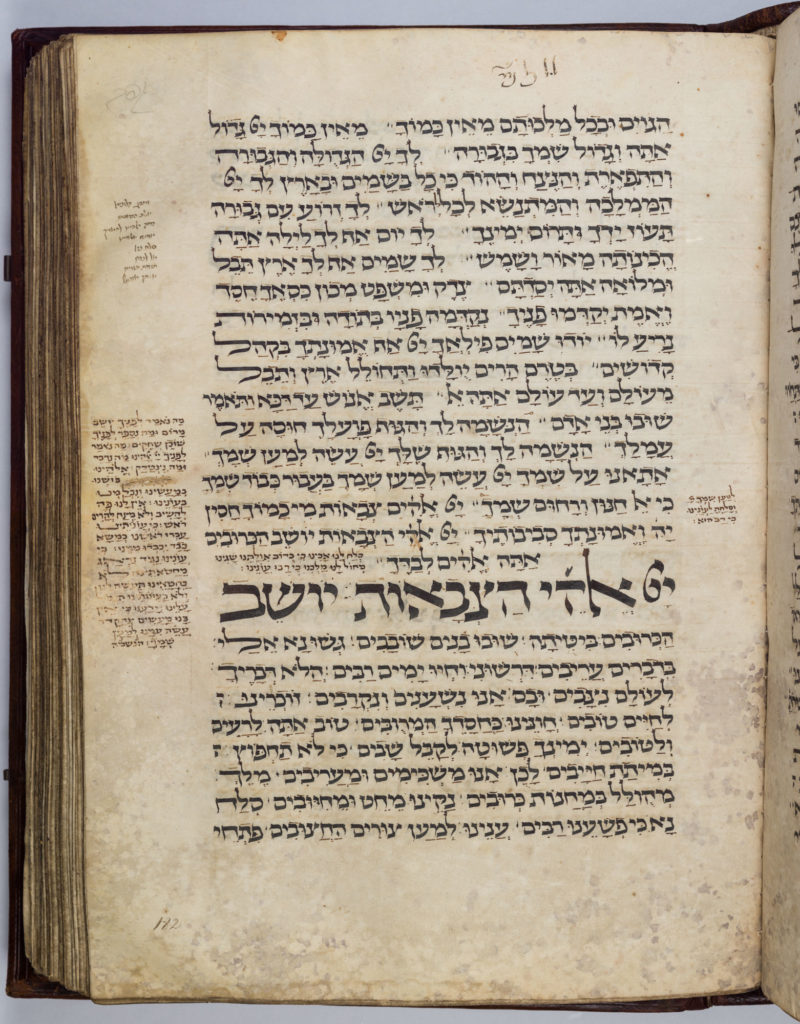 Creating an illuminated manuscript like the Amsterdam Machzor is a long and costly process involving many specialised individuals. The patron is often an affluent person. In many cases, the valuable work is donated to the Jewish community and reflects the donor’s wealth, status and piety. Gifts may be donated to the community in commemoration of a person, an event, or to settle a score. The Amsterdam Machzor contains no colophon with which to identify its patron or its provenance, or the date it was completed. Based on the liturgy and the decoration, the manuscript appears to have originated in Cologne. It was presented to the Jewish community of Cologne, which had existed there since the early Middle Ages.

The Amsterdam Machzor was designed and executed by several different people. Details in the execution reveal the work of at least three separate hands. A book illuminator was responsible for most of the decorations. The scribe was probably responsible for both the text and the decorative initials. A third hand is also discernible in some of the illuminated letters. It seems that the scribe made the underlying pen drawings over which another person applied gold leaf. This work is less precise than the scribe’s own initials since the gold often crosses the contours of the design. While no names are mentioned in this prayer book, it is evident that the Amsterdam Machzor is the work of professional craftspeople. 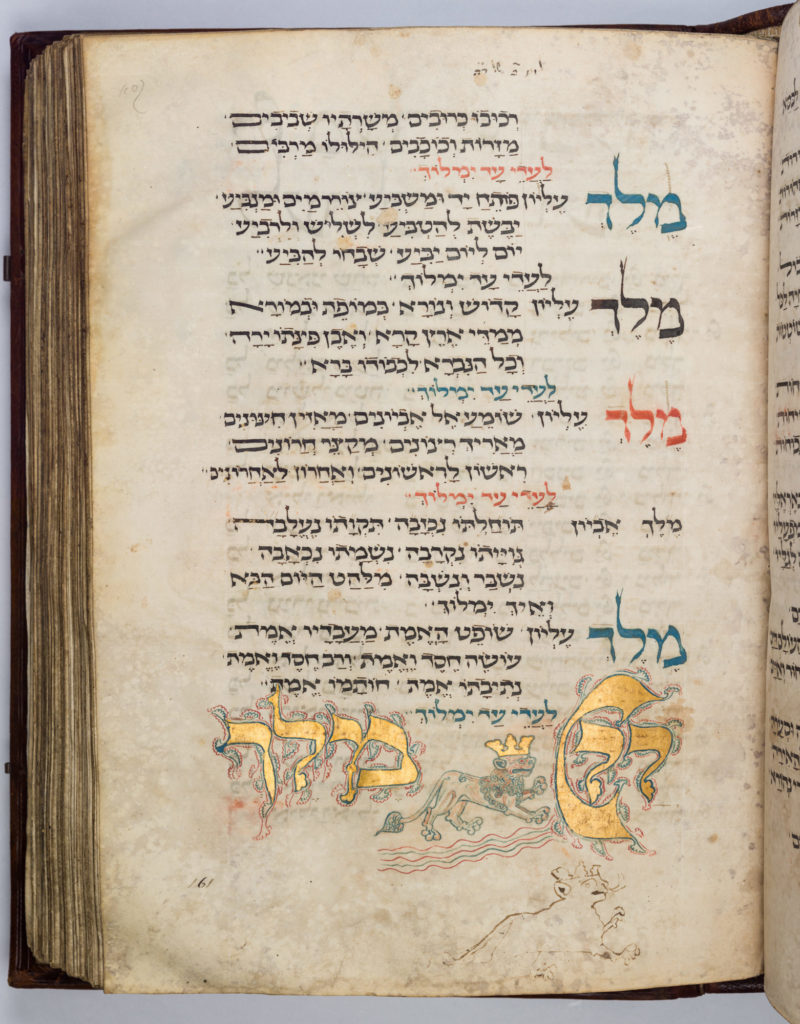 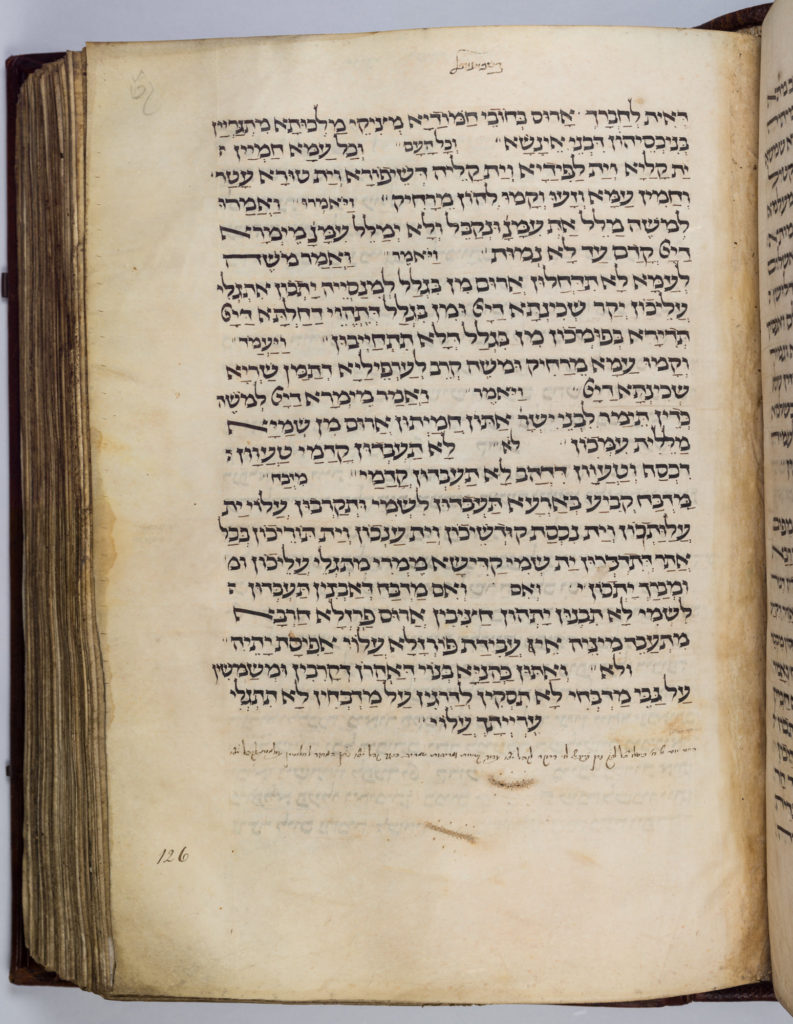 To judge from the many comments written in the margins of the Amsterdam Machzor by later users, the manuscript probably left Cologne in the Middle Ages. It is not until 1669 that the location of the Machzor can be determined for certain, based on two statements by Uri Fayvesh ben Aaron Halevi, a famous printer in Amsterdam. In 1669, he donated the manuscript – which he had received from his grandfather Rabbi Moses Uri Halevi – to Amsterdam’s Ashkenazi community to settle a quarrel. Since then, the Machzor remained in the possession of the Jewish Community of Amsterdam (NIHS). In 1955, the community lent the Machzor to the Jewish Historical Museum on long-term loan where it has often been on display until the recent purchase.

The Amsterdam Machzor contains no mention of the date it was made. Decorations in Ashkenazi festival prayer books of the twelfth and early thirteenth century are confined to the letters. It was not until the 1250s that a new standard was set for figurative ornaments in manuscripts of this type. The decoration in the Amsterdam Machzor diverges in many ways from this programme and bears a closer resemblance to Hebrew manuscripts and non-Jewish art of previous decades. The liturgical texts of the prayer book also suggest an earlier date. While the 1240s have often been suggested, the parchment nevertheless indicates sometime in the 1250s. 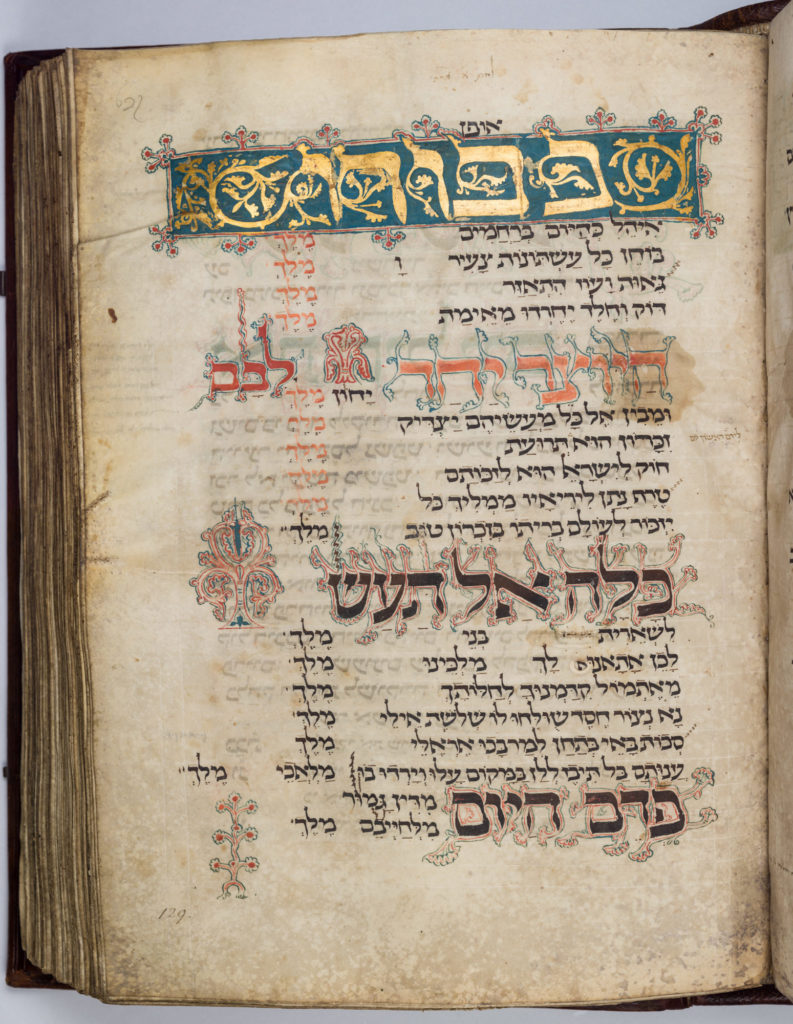 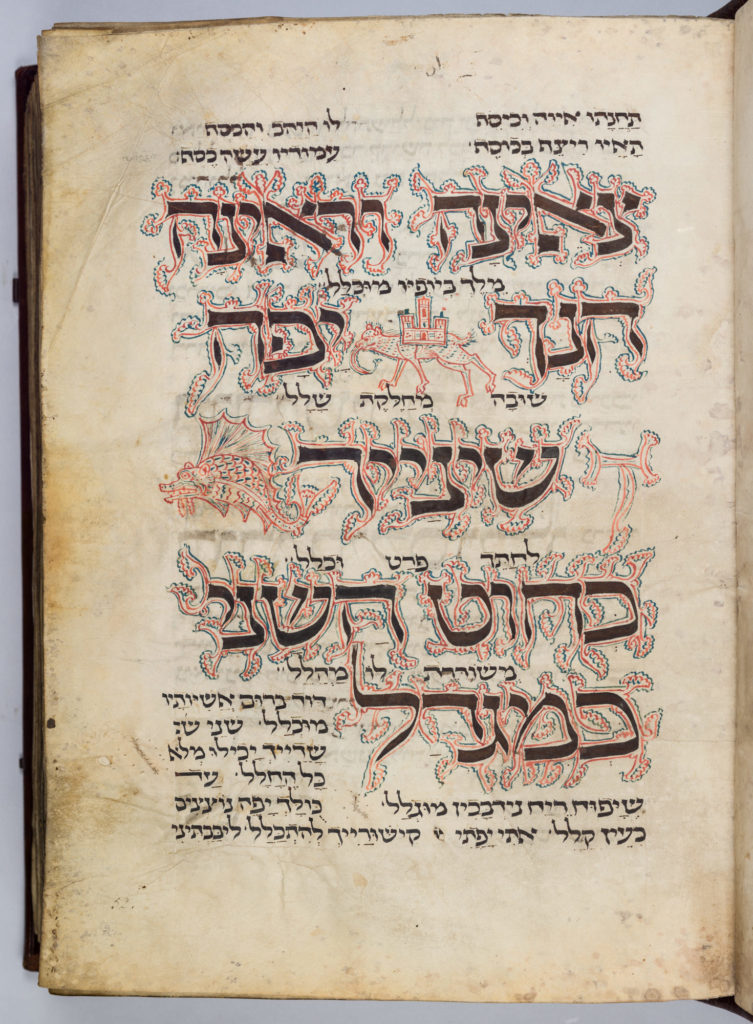 A Machzor is a prayer book for the Jewish festivals. Besides prayers, a Machzor also contains liturgical verse. These compositions recited on the various festivals are known as piyutim. Liturgy and piyutim may differ from one town to the other. The piyutim in the Amsterdam Machzor show that this Machzor adheres to the traditions of Cologne’s community. Moreover, the Amsterdam Machzor includes a haggadah, the order of service for the festive meal on Pesach, with its rituals, prayers and verse. This haggadah text includes piyutim which are still recited today. Later Machzorim (plural of Machzor) rarely contain the haggadah text, which makes the Amsterdam Machzor relatively unusual. After the thirteenth century, haggadot increasingly appear as separate volumes.

The Amsterdam Machzor was designed for use in the synagogue on festivals. On regular weekdays, the Machzor was probably not kept in the synagogue but in a congregant’s house. On the Jewish holidays, the Machzor would be brought to the synagogue by an official of the community, or by the patron who had commissioned the manuscript, and placed on the lectern. In the synagogue service, the chazzan (cantor) chants the prayers and verses from the Machzor. This chanting of prayers is a core element of religious worship during festivals. Led by the chazzan, the congregation sings and prays together. The chazzan occupies a prominent position in the community and is trained in the Jewish liturgy. He recites the prayers on the community’s behalf, as a messenger to God. 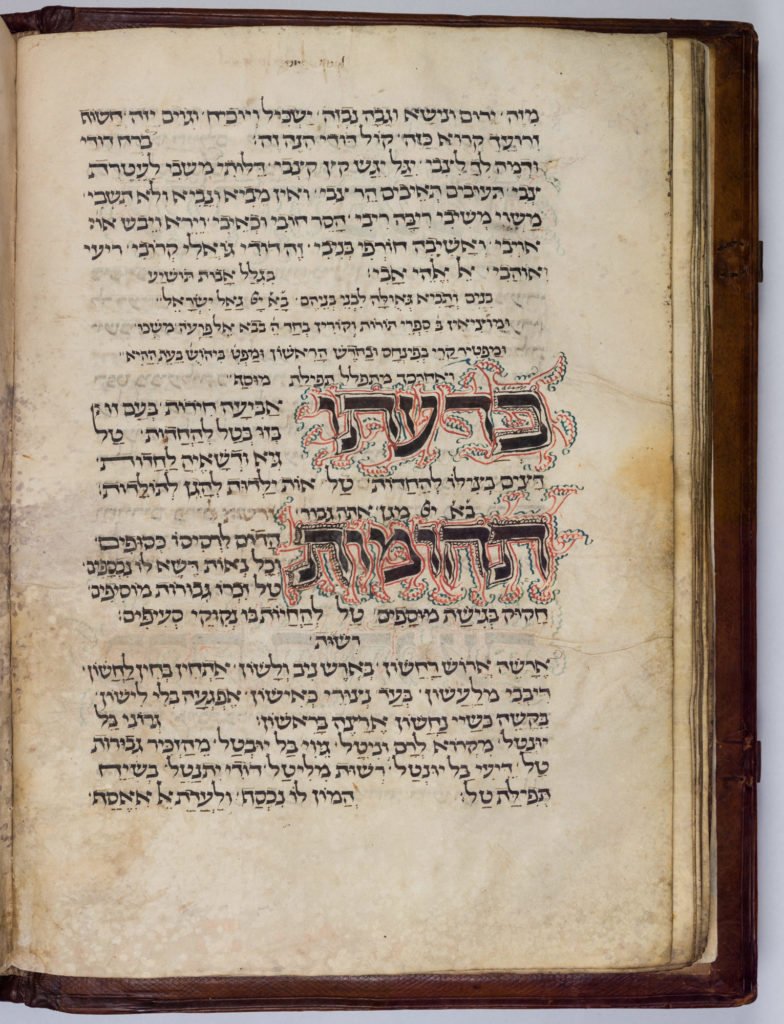 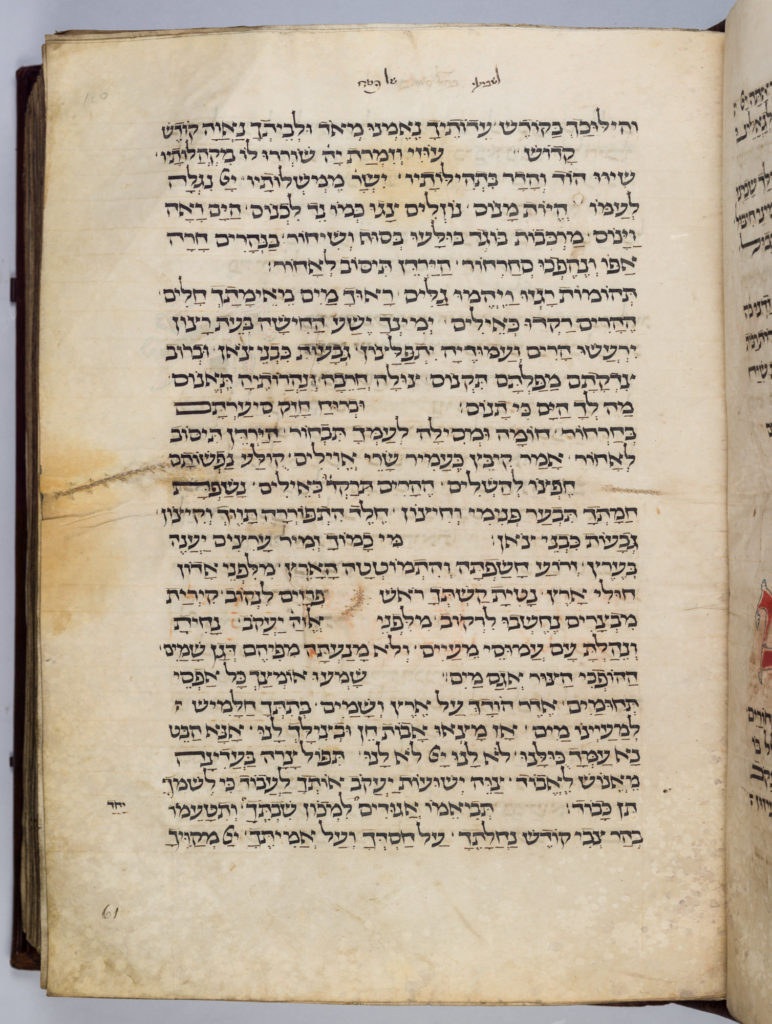 Apart from one missing leaf, the Amsterdam Machzor is complete. The book block comprises 331 leafs of double-sided coarse parchment. This is dried calf skin. To make it, the animal’s hide is soaked several times in water and lime, stretched on a frame and scraped clean of hair and flesh with a crescent-shaped knife. Then both sides of the skin are scoured to create two indistinguishable writing surfaces on either side. By 1260, artisans in southern Germany were able to prepare parchment well enough to make the flesh side and the hair side indistinguishable. Around the same time scribes developed new techniques for ruling lines. The Amsterdam Machzor reveals the use of different ruling techniques. It also contains occasional early repairs to the vellum.

Originally, the Amsterdam Machzor consisted of quires of four skins folded double to create eight leaves and so sixteen pages. At some point, the folded leaves were cut loose along the spine and sewn back together with overcast stitching. Each of the pages is prepared with 28 horizontal lines and two vertical lines to provide for 27 lines of text, ruled blind with a stylus or with a plummet. Pin pricks in the inner and outer margins remain where the guide lines were ruled. The book block is bound in an early nineteenth-century Dutch Bible binding consisting of boards covered in bovine leather decorated with a lozenge pattern and blind-stamped double frames. 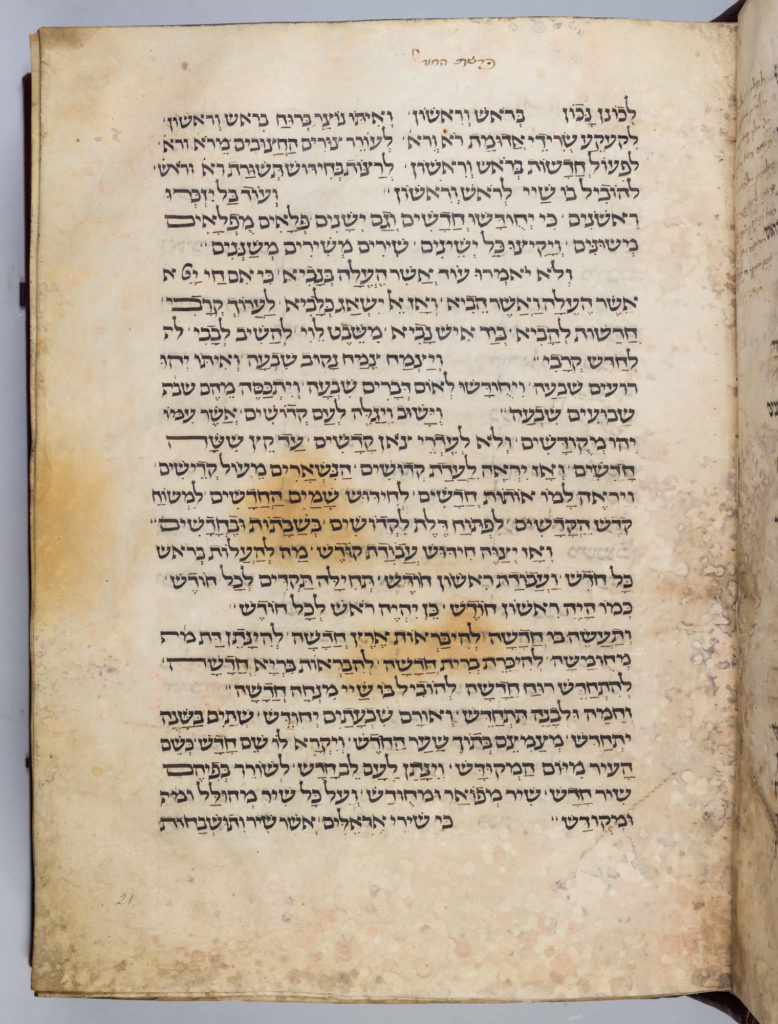 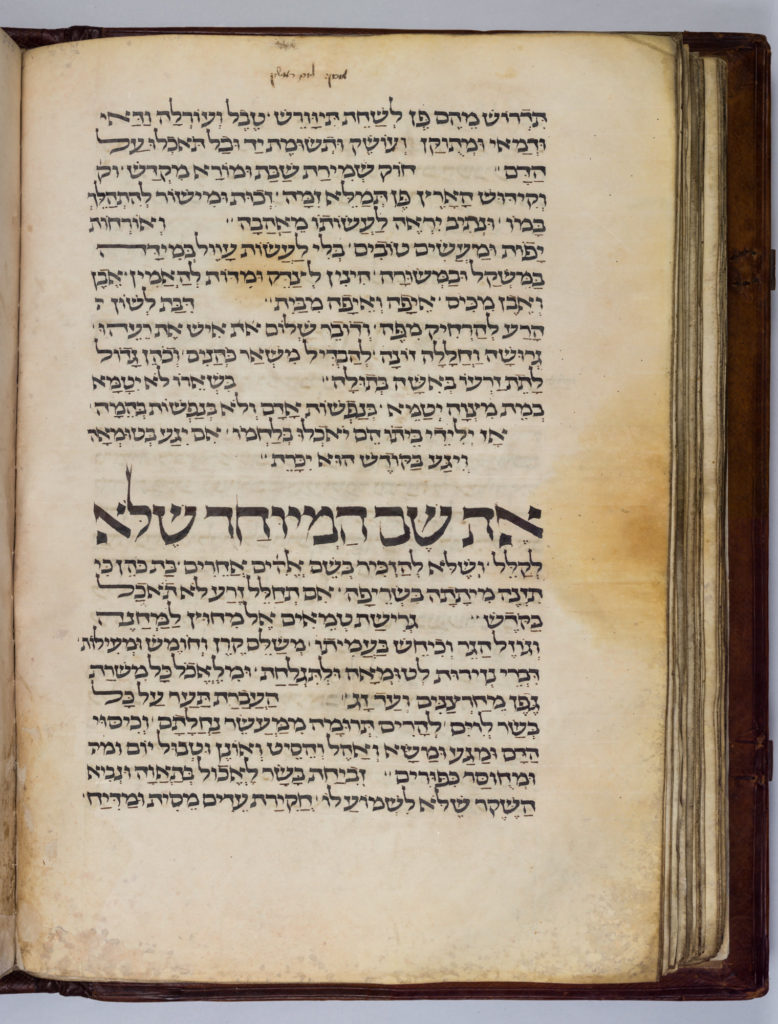 Handwritten Hebrew letters often reveal the geographical origins of the writer. Goose quills and reed pens are the two most commonly used instruments for writing, each producing a quite different style. Scribes of northern and western Europe prefer goose quills. These enable the writer to apply extra broad horizontal and thin vertical strokes. This gives Ashkenazi writing an almost Gothic appearance. Mediaeval scribes did not aim to create their own individual style. Yet while their ideal was to adhere to the stereotype, a wide range of styles can be found in Ashkenazi manuscripts. Based on the particular shape of these letters it is evident that the scribe of this Cologne manuscript originated in northern France. Indeed, northern France and the Rhineland formed a common cultural region.

The Amsterdam Machzor is richly decorated with illustrations, ornamental letters and words, and signs of the zodiac. These illustrations reflect the text. For example, the word migdal (tower) is illustrated with a picture of an elephant and a castle. The only scene depicted in the Machzor shows a chazzan wrapped in a prayer shawl, wearing a typically Jewish pointed hat, chanting from an open prayer book. The volume on the lectern is turned to the following page. Although the artist portrayed the chazzan’s face, this was subsequently obscured by a later owner. The Machzor also contains twenty ornamental initials adorned with floral motifs, decorative frames and (fabulous) animals in red, black, white and blue, some of which illuminated with gold. 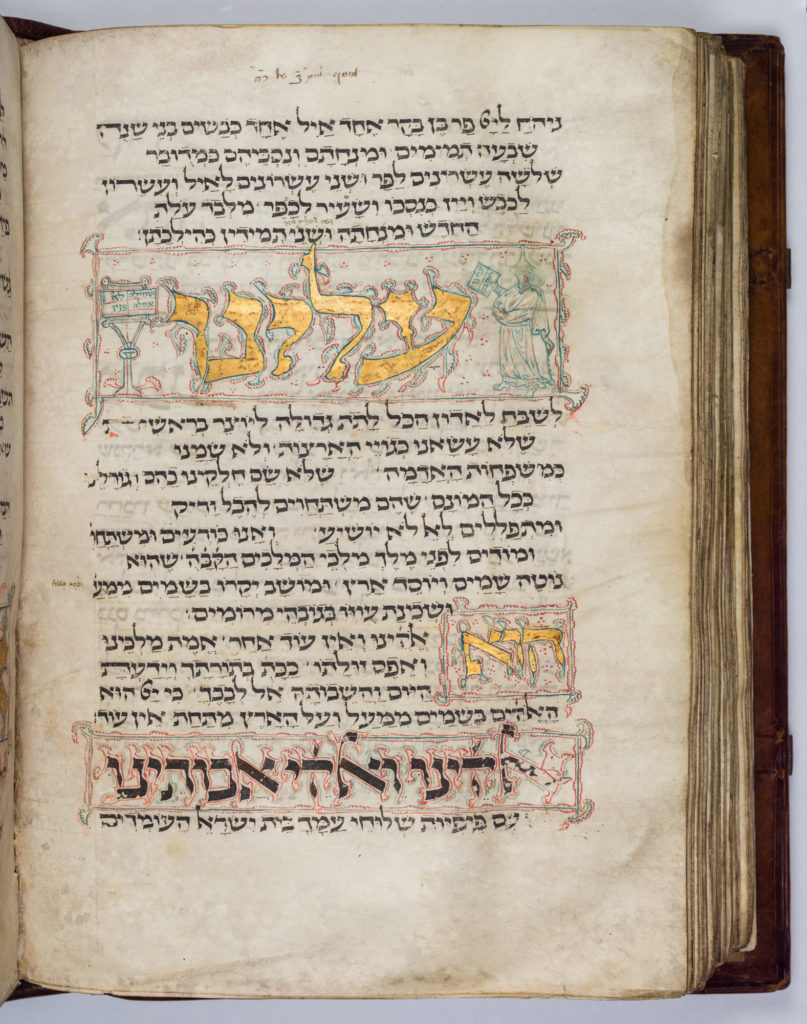 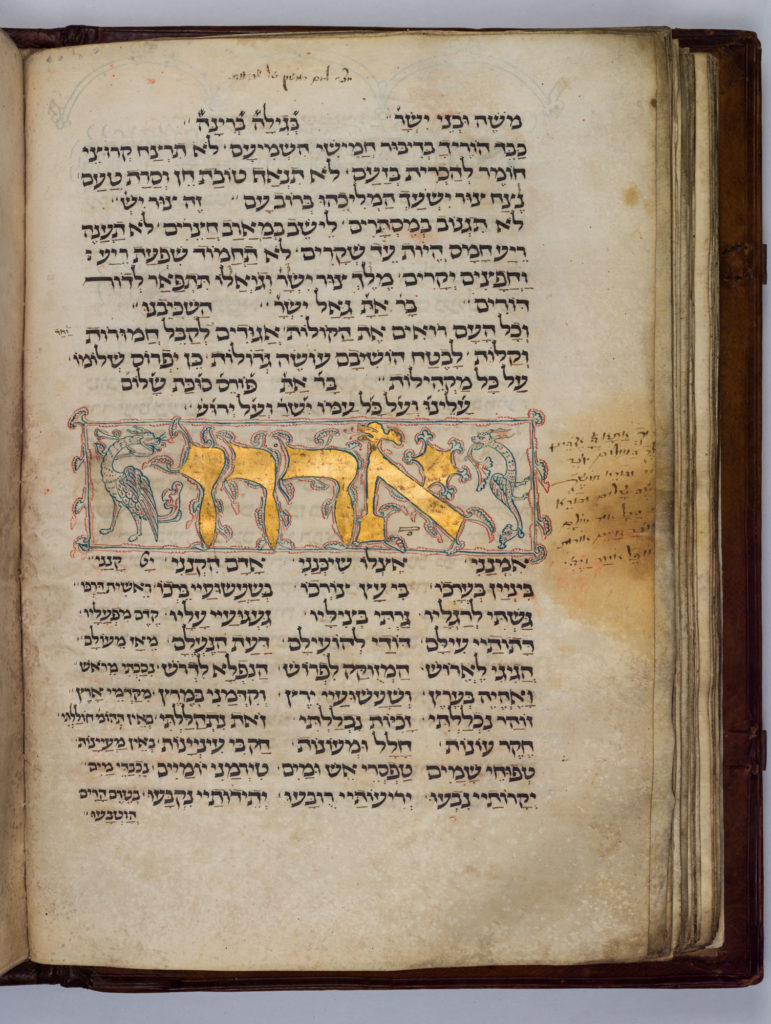 Many of the miniatures in the Amsterdam Machzor are decorated with gold. This appears especially in the initials, attracting the reader’s attention and embellishing the volume’s splendour. To guild the letters, the illuminator would use either gold leaf or gold dust. The design of the letters is transferred to the page with a series of pin pricks or as a pen drawing. Then the vellum is prepared with gelatine glue and other materials, such as plaster. A wafer-thin layer of gold is then applied with a tweezer or brush. An omission was made in two places in the Machzor where the gold leaf was forgotten, showing the rust-brown ground layer. Finally, the gold is polished to give it a splendid sheen.

The second of the Ten Commandments, which states ‘You shall not make any graven image’, did not prevent Jews from adding illustrations to manuscripts. Yet the biblical prohibition was not without effect. While the Amsterdam Machzor contains depictions of complete human figures, with no omissions or alterations, later manuscripts generally portray human figures with incongruous elements such as an animal head on a human frame, or unfinished faces. This custom is traditionally explained as a solution to the practical problem presented by the second commandment, although it is not employed in the Amsterdam Machzor. This too is an indication of its early composition. 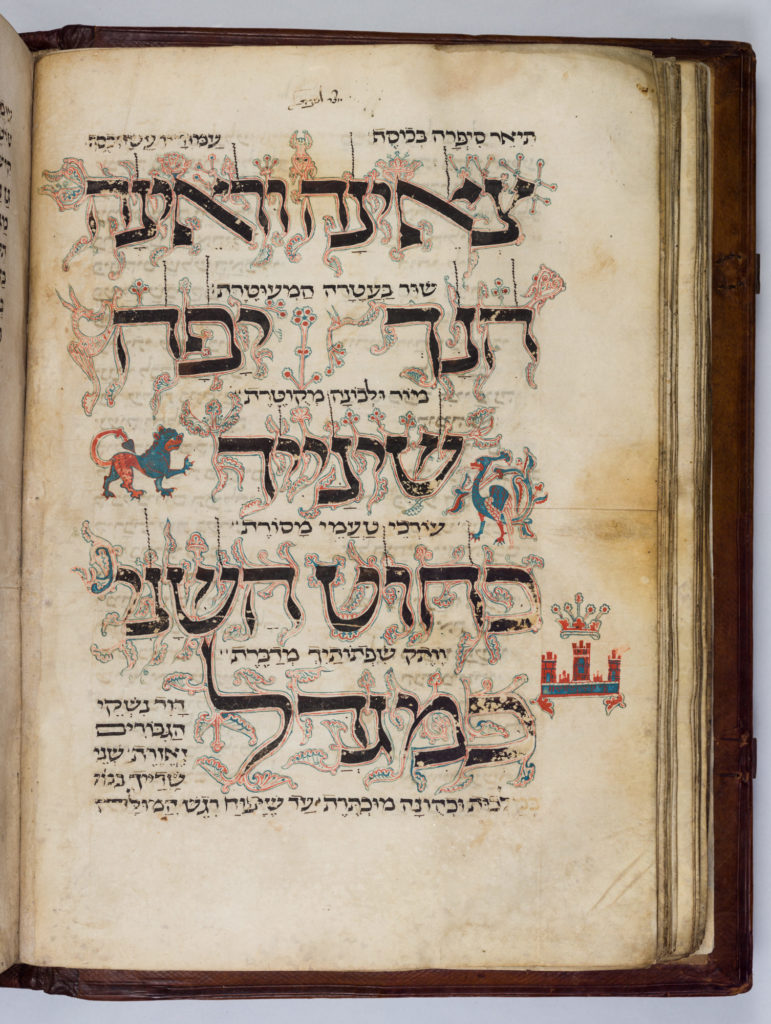